Caps: Biocaps. The in-game currency that can be used in place of almost all tasks: resources, building, researching, training, healing, buffing, etc.

DM: Direct Message. Also called Private Message (PM), a message sent directly to another player for a 1-on-1 conversation.

F2P: Free to play. A term used to describe players who do not spend real money in the game.

Incubator: A feature of the Research Lab where chiefs can deposit biocaps to earn biocaps after a fixed period of time.

Market Stall: A feature of the Trading Post that allows chiefs to exchange resources and biocaps for speedups, VIP points, skill books, other resources, and other items.

NAP: Non-Aggression Pact. An agreement with another alliance to not attack them or build aggressively towards their territory. NAPs are usually made between top alliances in the state to allow each other to grow without fear of attack. NAPs are typically not alliance pacts as NAPs allow alliances to grow peacefully together, but do not require a call to arms when an alliance under NAP is being attacked.

PM: Private Message. Also called Direct Message (DM), a message sent directly to another player for a 1-on-1 conversation.

PZ: Plague Zone. An infected area of the map that players and their alliances can attack for rewards. 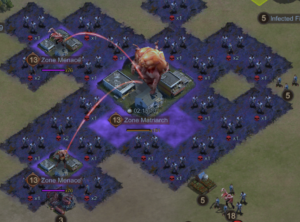